You are about to leave ViiVMedinfo.

By clicking "Allow," you will be taken to a website that is independent of ViiV Healthcare. The site you linking to is not controlled or endorsed by ViiV Healthcare, and ViiV Healthcare is not responsible for the content provided on that site. 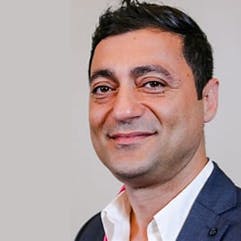 With extensive experience in HIV specialty care and the HIV pharmaceutical industry, Dr. Michael Aboud brings invaluable skills and background to ViiV Healthcare, with areas of expertise including HIV clinical practice, medical strategy, data generation, and clinical development. His passion for improving HIV care and treatment began during his medical school training in Sierra Leone, where he witnessed the outcome of HIV, opportunistic infections, and limited or no access to antiviral therapies. This exposure left a lasting impression that strongly influenced his career path. Michael’s passion to improve HIV outcomes coupled with a desire to be at the forefront of HIV research and innovation led him to ViiV, where he now plays a key role in improving HIV care and treatment worldwide using novel therapies.

Michael joined ViiV initially in 2013 as Global Medical Lead for ViiV, progressing to his current role in 2016. Prior to ViiV, Michael consulted for five years as Honorary HIV Consultant at Barts and The London NHS Trust where, with his high level of expertise in HIV, he provided inpatient care for those who were sickest or had complicating opportunistic infections. During this time, he also held Medical Lead positions at Janssen Therapeutics and Johnson & Johnson, managing medical strategy for HIV investigational drug programs in the UK and Ireland, including strategy for investigator- sponsored studies and data generation.

Michael obtained his medical degree in 1999 from the University of Sierra Leone and is a member of the Royal College of Physicians, London. He holds a Diploma from the School of Tropical Medicine and Hygiene in Liverpool, and has earned additional specialty diplomas focused on HIV, including Diploma in HIV, Diploma in Genitourinary Medicine, and Faculty of Sexual and Reproductive Healthcare Diploma. In 2014, Michael received a MBA from Imperial College, London.

Michael lives in Richmond, a borough of London, and in his spare time, enjoys traveling, cooking, and reading.

Are you a US healthcare provider?

This web portal is intended as an educational resource for healthcare providers practicing in the United States. It may include information about products or uses that have not been approved by the US Food and Drug Administration.

If you are not a healthcare provider, please discuss any questions you have regarding your health or medicines with your doctor, pharmacist, or nurse.

Connect With Our Medical Experts

Talk to a Medical Expert

Submit a request for additional information from a ViiV Medical Expert.

Get immediate assistance from a ViiV Healthcare Professional.

Our Response to COVID-19